This is a web page dedicated to showing off and explaining some results obtained via (early) prototypes of the RRUL test suite.

Various fq_codel based rate shaping prototypes are under test at the Yurtlab.

An initial test of the comcast based connection, using standard drop tail and no other optimizations:

After rate shaping was employed via this HTB + nfq_codel script , which gives EF packets a max of 33% of the bandwidth, and background traffic a max of 20% under contention, this is what that network now looks like:

Bandwidth went up, and more importantly the increase in latency under load dropped to less than 4ms on average. However averages are misleading, and a RRUL CDF plot is more accurate.

It was actually impossible to get an accurate measure of the actual bandwidth available using the non-rate shaped version! Using the RRUL test and changing the rate shaping parameters, it became possible to get an accurate measurement of what was actually available on this link. IT was rated for 22 Mbit down, 2Mbit up, and the actual performance achieved was very, very different, closer to 20Mbit down, 8 up.

This is fq_codel, by itself, without rate shaping, on this link:

Although the results are more “fair”, they aren’t very much more fair. Most of the buffering moved into the cable modem and CMTS where it was unmanaged. You have to take back control of the buffering into your own device in order for this stuff to work, by setting your rate a little bit below the provided rate.

It is perhaps more illustrative than RRUL alone, to run it twice. In this test series a second copy of the RRUL test was run at T+30 seconds, and the first RRUL test extended to run for 120 seconds (-H 120)

As you can see, the second test kicks in quite rapidly, and when complete, the other test scales back up to full bandwidth, quite rapidly.

In the above test the second test doesn’t ramp up to full bandwidth for over 20 seconds after test start, and the TCP streams are very “unfair” relative to each other.

For more detail on these tests see http://snapon.lab.bufferbloat.net/~d/campground/

Verizon FIOS Testing at 25Mbit up and 25Mbit down

Before a fq_codel enabled shaper is deployed:

Verizon seems to have egress buffering under control, but probably has an ingress buffer set to a good value for their highest end 300Mbit service.

After a fq_codel enabled shaper is deployed:

5 times the upload bandwidth, and roughly 1⁄7 the observed latency.

One interesting result obtained along the way was a textbook case of TCP Global Synchronization where multiple streams would synchronize, collapse, and restart at the same time. This is the behavior that the RED algorithm and successors in particular were designed to avoid… if they had ever been deployed. The second chart in this image shows what TCP global sync looks like. 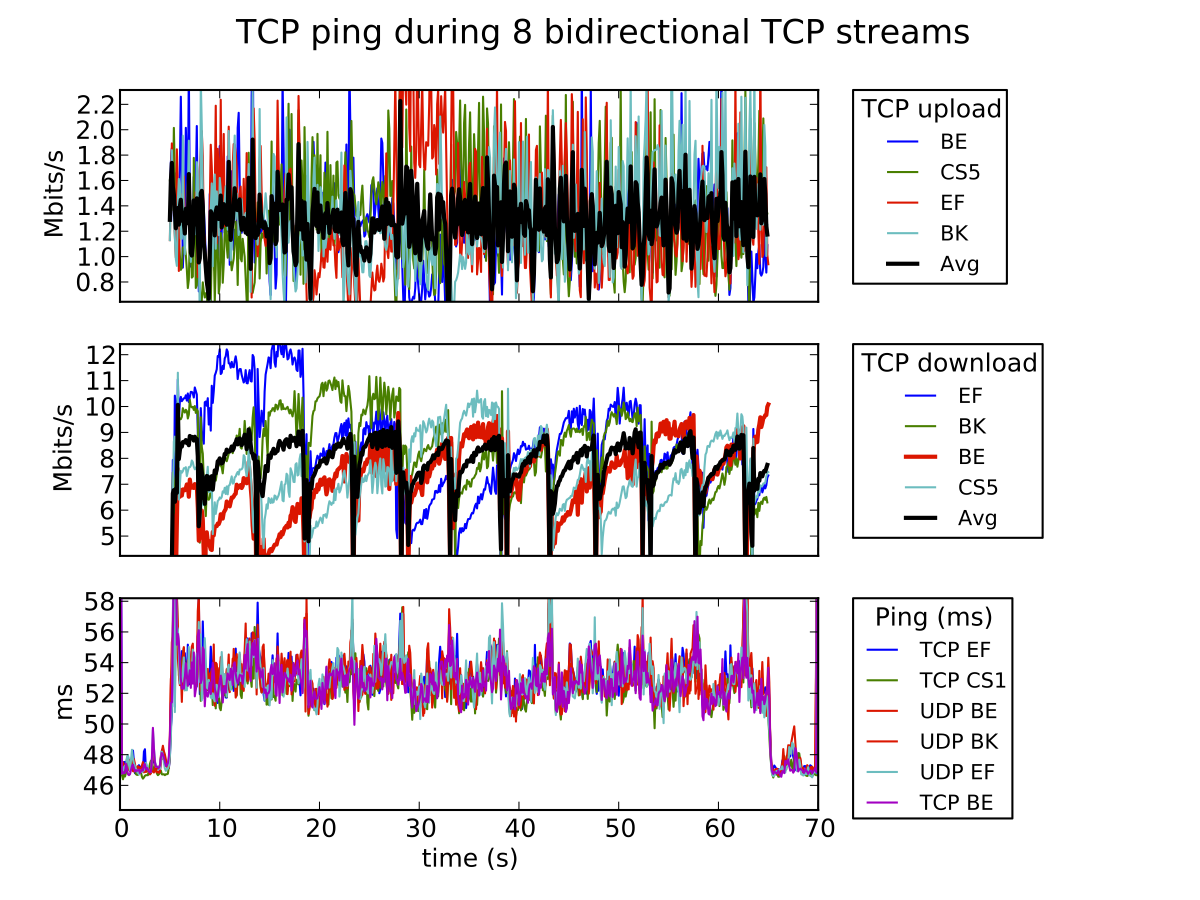 These results were obtained over a 40ms link between Denmark and Germany, on a device that probably had a very short TXQUEUE. So this is what can happen if buffers are too small, rather than “just right”.

To edit this page, submit a pull request to the Github repository.