The charts on this page were created by Flent, a Python program that runs the RRUL (and other) tests and creates graphs of the result. This page describes the charts created by the Flent program.

An RRUL test run saturates the network by initiating eight data connections to/from a netperf server at a remote location (four simultaneous connections sending data in each direction). Each connection has a different diffserv class to compare their performance and fairness. In addition, the RRUL test measures latency across the network with ICMP or UDP pings.

The image above shows two Flent RRUL runs, with good (on the left) and poor latency control (on the right).

Note: The measured download and upload rates tend to be lower than the full rated speed of the ISP connection. This is because the TCP Ack traffic uses a significant fraction (often as much as 20%) of the capacity in the opposite direction. This does not skew RRUL results, because all tests will have the same testing conditions.

The Cumulative Distribution Function charts (CDF) show the percentage of readings with latency below a certain time. The two charts below show the same test runs as the charts above: one (on the left) showing good latency control, while the one on the right shows poor control.

In addition to displaying the results of the current run, Flent can save those results for later analysis. The Box Plot displays the result of multiple test runs to provide a comparison. 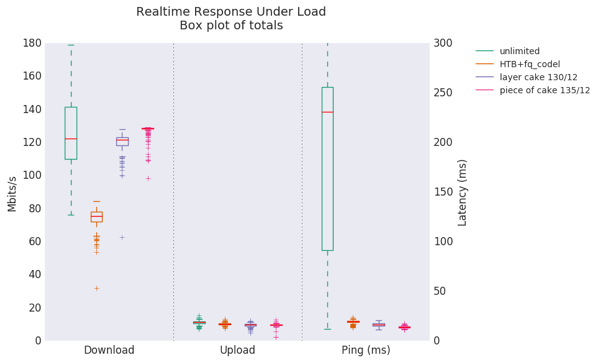 Note that all four plots show that upload speeds perform at the rated ISP link speed, and the last three qdisc’s (2-4) gave very good control over latency, with “piece of cake” being a slight winner.

Many thanks to Aaron Wood for permission to use images from his blog post about setting up SQM, QoS, fq_codel, and cake. Read more at: http://burntchrome.blogspot.com/2016/12/cake-latest-in-sqm-qos-schedulers.html

To edit this page, submit a pull request to the Github repository.